When the page loads up, a picture will be shown. The user will guess who or what the picture is by typing his answer on the provided text field and clicking the submit button.

If the user guesses correctly, proceed to the next picture and let the user guess again. If the guess is incorrect, display a “Try again message”, clear the text field and await for the response.

Will make the html portion quite spartan. We won’t use any fancy divs or nested tables so that we won’t get distracted by styling clutter. We will handle the image using the img tag. We will use the old school input element for the text field and we will use the button element for, well, the button.

The JavaScript part of our solution will be in an external file named script.js, so our JS and HTML codes don’t mingle up. We will use JQuery for DOM manipulation, surely by now you must be tired of typing document.getElementById. We can do this by embedding two script elements in the head region of the html code.

The script tag above assumes that you have downloaded the JQuery library into your work area. It also assumes that the JQuery file and script.js is located on the same directory where the html file is.

The full code listing for the html part is below.

Create a file named script.js on the same folder where you created index.html. It is not necessary, neither it is always desirable to put the JS files on same folder as other files such as html or images, but we chose to do it that way to keep the codes and directory structure simple.

First thing we need to write is the block of code where we will put all of our subsequent JavaScript codes. Many other programs require such an entry point. If you have experience coding in other languages, you might remember that there is a function main which serves as the program entry point. In JavaScript however, you cannot simply write a function called main and proceed from there. Well, actually you can write a function and name it main, but that won’t do anything. It will simply be a regular function. It won’t have magical powers that makes it a program entry point.

JavaScript is event aware. You can listen for events and then write code when that event is raised. There are two sources of events in our use case. The user will raise an event when he types his answer on the text field and when he clicks the button to submit his answer. The browser also raises events. When a page is pulled from a web server, it goes through some stages

In order to write our program entry point, we will choose an event that the browser will raise, and use it as the entry point.

The above snippet is a JQuery code. It binds our code into document.onload event of the browser. When the browser has finished processing all the DOM elements in the html, it will raise the document.onload event. We are simply latching on to that event. Think of this code block as some sort of initialization routine. If you need to define arrays, variables or bind buttons to events, this is the place to do it.

Make sure the simplest scenario is working

The best advice I have ever given to beginning programmers is to make sure the simplest scenario is working— next only to “don’t forget the semicolon”. A complex system does not start out to be complex, they start out as simple systems. They get complex in time. Make sure that the building blocks of your code are sound and that they are working.

We need to make sure that our program entry point actually does something. A small noticeable change in the UI will do. Let’s change the text of the heading element.

Open index.html using the browser. You should see the “Hello there” message when it loads. It will confirm that our code is actually running when the page loads. If you don’t see the message, you need to check your code for spelling and other typing errors. If you know how to use the debugging tools in the browser such as FireBug in FireFox and the developer tools of Chrome or Safari, they will help you find the errors faster.

Next step is to display just a single image when the page loads. That can be managed using the following code

The code above assumes the file bugsbunny.jpg is on the same folder where index.html and script.js are. Right after we get the IMG element using the #a selector, we changed the SRC attribute programmatically using the JQuery attr function. That code should display the contents of the image.

Next thing to manage is accept user input via the text element and do something with when he clicks the button. For that, we need to bind the click event of the button to our code.

Our click handler is quite simple. It extracts the value of the text field and changes the message of the heading element to whatever the user has typed in the text field.

We will add some more codes so we can check the user’s input against the correct answer.

The answer key in our example code is hard coded, in a real life application this should be pulled from a data structure like a database or a file.

At this point, we know we can display a picture, wait for a user’s input and validate whether it is correct or otherwise. We can now use this as a building block for the more complex portion of the solution.

The complexity of the use case, clearly, does not lie in mechanics of input, validation and graphics display. Those are easy enough tasks to manage. The slight difficulty in the use case is in the workflow. We need a simplistic game engine to satisfy the use case requirement.

This is the basic workflow that we need. 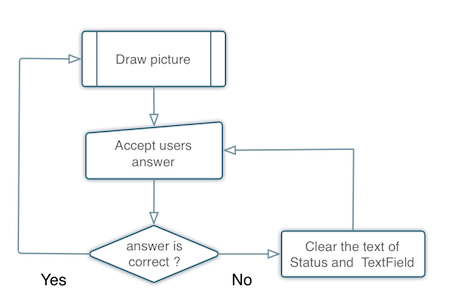 In the previous section, we explored how to display just one card and let the user guess. That much we can do. The challenge is how to make more cards and let the user go through all of them. Using the flash card analogy, let’s rewrite our game engine workflow.

There are two data structures that we need to figure out. The card and the deck. The card data structure cannot be held by simple scalar variables. It needs a more capable and complex data structure. We want it to hold the picture and the answer key. The deck is really just a collection of cards,

There are lots of options for us. At first glance it looks like a relational database is good tool to represent our data structure. A record in the database will represent a card and a deck of cards is a table. We can also use an XML file. Or we can use JavaScript objects. For the purpose of our practice, we will use JavaScript objects to represent the card and we will store all these cards inside an Array. The Array data structure is our deck.

The card data structure can be represented in code like this

The above code shows how to declare an object in JavaScript Object Notation (JSON).

We need to somehow define each card and populate the deck with it. We will use the built-in JS Array to represent the deck.

The shift method of the JS Array provides the mechanism to take the top card from the deck. When you call shift, it removes whatever is on the top element of the array and returns its value—it allows us to store the return value to a variable, that was why it was assigned to currcard.

We now have the essential technical details and workflow to put it all together. The program entry point is when the DOM has finished loading. There are two data structures that we will use, the card data structure which is an object literal (JSON format) and the dec which will hold the collection of cards, the deck will just be a standard JS Array.

First thing to do is to initialize our cards and deck. We will give them some values. These codes are encapsulated in the function named Init.

When the cards and the deck has been initialized, we call the Draw function. It pops the top card and displays the picture associated with that card. It also stores the value of the top card to the variable currcard because we will need the value of current top card when we compare the user’s answer to our answer key.

When the user types his answer and clicks the button, we simply compare the value of currcard.answertext which is our answer key to whatever the user has typed on the text field.